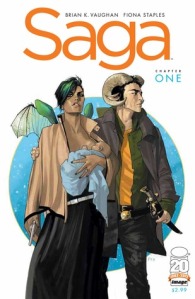 Star Wars-style action collides with Game of Thrones-esque drama in this original sci-fi/fantasy epic for mature readers, as new parents Marko and Alana risk everything to raise their child amidst a never-ending galactic war.

This has been on my shelves for a while, as have Volumes 2 and 3….

It starts with Alana (from the planet Landfall) giving birth to her daughter conceived with Marko (he from the moon Wreath) – they are from two opposing sides on a long running war, that noone really knows why the war is still going on. Both are soldiers, though Marko is really a vegetarian pacifist, who has a good line in healing powers.

They have to go onto the move almost immediately as they are being chased by their enemies, including Prince IV (a humanoid with TV for a head); The Stalk and The Will, the latter two being mercenaries who have been hired to track the two of them down. Alana and Marko are to be killed but their child (now being called Hazel) is to be brought in alive.

Alana, Marko and Hazel are guided to an escape point by Izabel, a ghost – a young girl who is presented as being cut off at the waist, her entrails hanging neatly below her torso.

This is the beginning of the story (there are another three volumes, with more likely) so there are plenty of threads being kicked off and none of them really being resolved. The story is narrated by Hazel whose voice is portrayed as writing in the cell, foreshadowing what’s coming.

The artwork is thankfully away from that of the main houses, which allows for a more individualistic look, and where you rarely remember the wings or the horns of the two main characters. It has all the makings of a decent space opera and I can see why this, and subsequent volumes, are award winning. Certainly a set of books to keep an eye on.

This site uses Akismet to reduce spam. Learn how your comment data is processed.